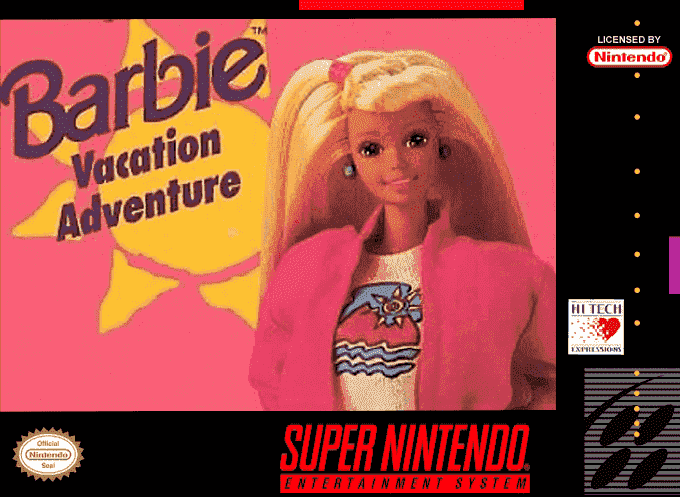 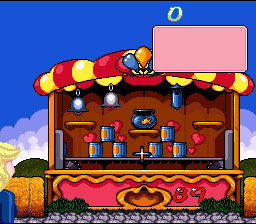 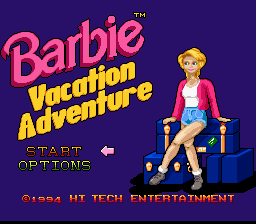 In Barbie Vacation Adventure, Barbie, along with her friend Midge in two-player mode, travels around the country to four different vacation spots, each with its own set of mini games. In Iowa, at a county fair, Barbie must catch an escaped pig by walking up to it and pressing the action button, after that she can play carnival games. The options are a strength test, knocking down cans and a hit-the clown game. In the latter two, players can aim balls with the d-pad, then throw with the action button. Leading targets is required. The strength test has a mater that goes up and down and Barbie must land her hit when the indicator is on the bell to ring it. In Wyoming, Barbie goes camping. First, she must assemble her tent. This is essentially a jigsaw puzzle. Next, she must jump from rock to rock to get to the other side of the park where she can go on a nature hike. In the next segment, players aim a camera cursor at animals as Barbie walks along the path and hit the action button to take photos. This requires good reaction time. There's a ranch in Texas where Barbie can ride horses. The horse runs on its own. The player pushes the action button to make it jump. There are numerous gates on the course and the player must time jumps correctly to clear them. If they hit too many, they must start over. There is also the option to play horseshoes. The cursor moves about erratically and you must press the action button when it passes over the stake. In Florida, Barbie can play volleyball against Midge. This game allows both players to play simultaneously in two-player mode. Barbie and Midge can move forward or backward on the court and hit action to set the ball. First one to ten points wins. There is also a diving segment where barbies must navigate an underwater maze to collect sunken treasure. It might remind some people of Barbie's Ocean Discovery. Finally, there is Barbie's home in California. Ken has hidden presents around the house and Barbie must find them and identify them by shape.