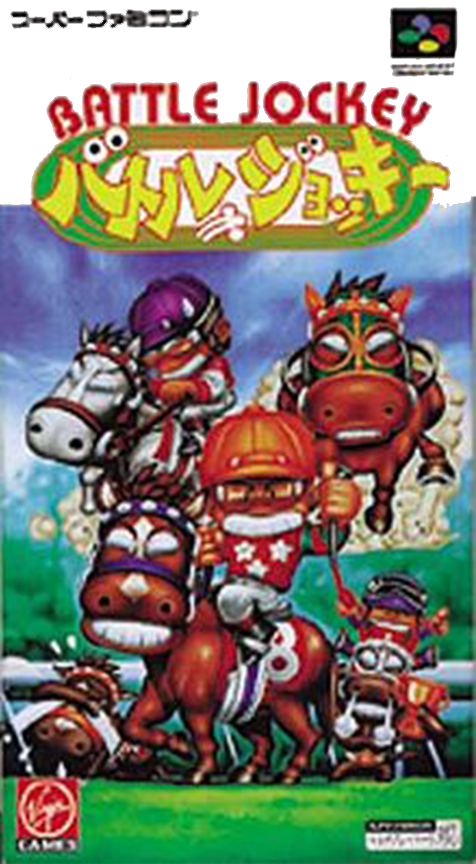 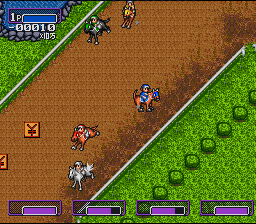 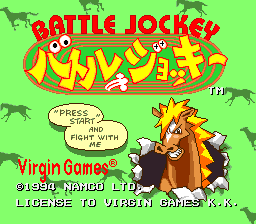 Battle Jockey is a racing game for up to four players that was developed by Nova and published by Virgin Interactive exclusively in Japan for the Super Famicom.It features horseracing, a far more popular pastime in Japan than elsewhere, and presents three separate modes: the first is the standard single-player story mode, in which the player takes a horse and jockey through training and races; the second is a battle mode which pits up to four players against each other in races that have far more power-ups and other unusual additions to the game's courses; and the third is a passive gambling mode in which the player puts money down on horses depending on their odds of winning and subsequent payouts and then watches the race play out with CPU players.The standard mode involves carefully managing the horse's stamina: being too aggressive will cause it to rear up in protest. Falling behind or running into a hedge or jump will cause the horse to lose stamina, and losing all stamina causes it to collapse briefly. The player needs to keep a steady pace, steer carefully around corners, jump at the right times and use the boost sparingly in order to win. In the battle mode stamina is less of a concern and the game more resembles RC Pro-Am: the players have to simply follow the course and avoid the dangers as they show up.