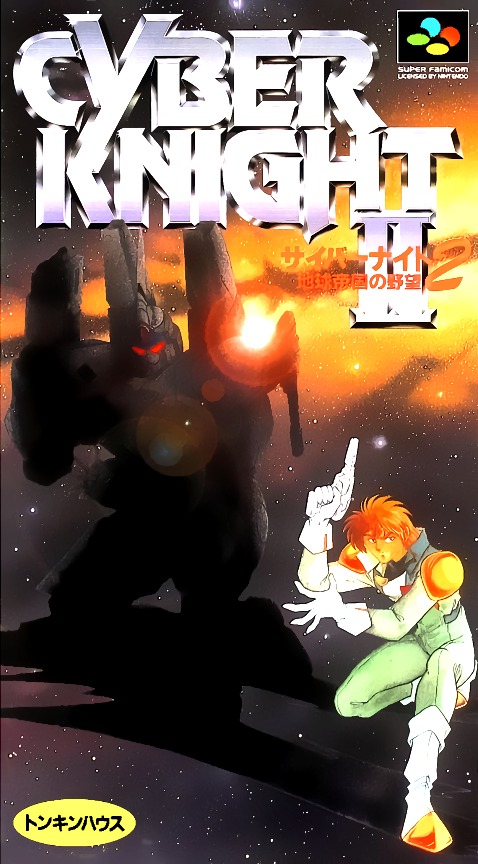 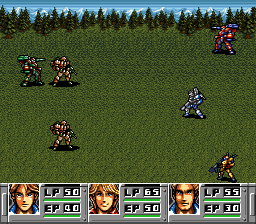 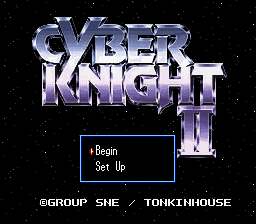 Following the events of the first Cyber Knight in the 24th century, the crew of the Swordfish have returned to Earth after defeating the mechanical "Berzerkers" far across space. However during their time away, the Earth Federation has been taken over by the ambitious General Forrest, who seeks to wage war on the independent systems and conquer them. Recognizing the potential weapons that could be made from the Berzerker science data, Forrest impounds the Swordfish and jails it's crew. The Berzerker data is used to create "Overtech" and bring to life "Metalliforms", self-replicating war machines. The Swordfish crew manages to escape, thanks to a mysterious agent "CJ", and are recruited into the resistance against the Earth Federation. Given a new spaceship, the Galvodirge, they must travel the galaxy to different human civilizations and devise a plan to stop Earth's attack. Cyber Knight II is an RPG with science-fiction themes. As in the first game, much of the game takes place in a top-down view for movement on planets and areas, a side-view for combat sequences and a first person menu system when aboard the Galvodirge starship. The Galvodirge can travel between stars, scanning worlds for information. If the ship is able to land on a planet, the crew can debark either on foot or using combat modules (mechs). Some areas are only accessible using modules and others (such as towns) do not allow the use of these war machines. Many planets will have towns or people living on them which can be talked to in order to uncover information. Different quests are assigned in order to find the items necessary to progress. There is no system of currency or buying items. Instead, many defeated enemies leave behind "NeoParts", which can be brought back to the Swordfish's lab. Analysis of these Neo parts unlocks enhances statistics (endurance, agility, accuracy, etc) for the Modules and new weapons for them to carry. The crew are divided into a three person "combat team" and a three person "support team". If modules are used, they can be assigned from the ship's hanger. Unlike the first game, modules only perform a combat or a support role, and each is unique in statistics and the type of weaponry it can carry. When combat occurs on the main map, the support team will often deliver the first strike by firing missiles into the enemies. When searching facilities, caves or other locations, the support team is not available. Following either case, the combat team engages the enemy in turn-based combat on a 6x6 squares field. Seen from the side view, the three modules can be positioned in relation to enemies in order to attack, using a variety of melee and long-ranged weaponry. Ammunition is unlimited, but each module also carries a number of "options" that are consumable attacks. Each Module has two sets of hitpoints: one for the pilot and one for the module itself. If either one of these reaches zero, the module is destroyed. In order to heal, the party carries 10 each of repair kits and first aid kits, which must when not in combat. These kits, as well as options and defeated pilots or modules can be restored by returning to the Galvodirge.