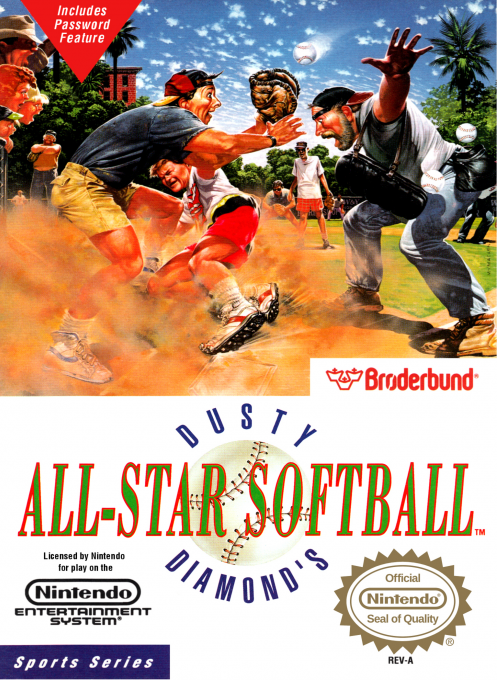 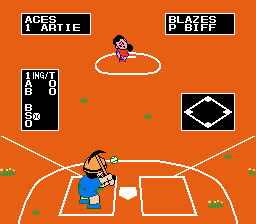 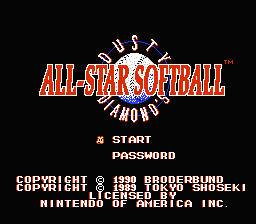 All weekend ballplayers know softball's no joke, but that doesn't mean you can't have a little fun with it. And when you step up to the plate in this cart you'll find the wackiest bunch of players to ever hit a softball diamond! Play seven inning fast or slow-pitch games. In One Player mode, you face the computer in a five-game elimination tournament. Win them all, and you earn the right to challenge the awesome Amazons - All-Star Softball's all-time championship team. Of course, you and a friend can play each other in a head-to-head contest. There are no preset ball clubs so you recruit 10-member squad from a roster of 60 weird players. Look for players who have strong basic baseball skills such as arm strength and speed. But to win on some of the tricky fields you'll also need players with more unusual skills - such as climbing fences, diving into water, and flying at night In fast pitch, you hurl that baby in three speeds. But stay alert, base runners steal and batters bunt. In slow pitch, you can lob the ball short or long. You can also make your pitches curve right or left.Fielding the ball takes practice, but your guys can also dive for hard grounders and leap up to snare line shots. For quick double plays, infielders can tag a base then throw the ball. With six softball fields to choose from, including the Sandlot, the Cliff, and a Professional field, there's some great action. Get ready to take yourself out to the softball park.