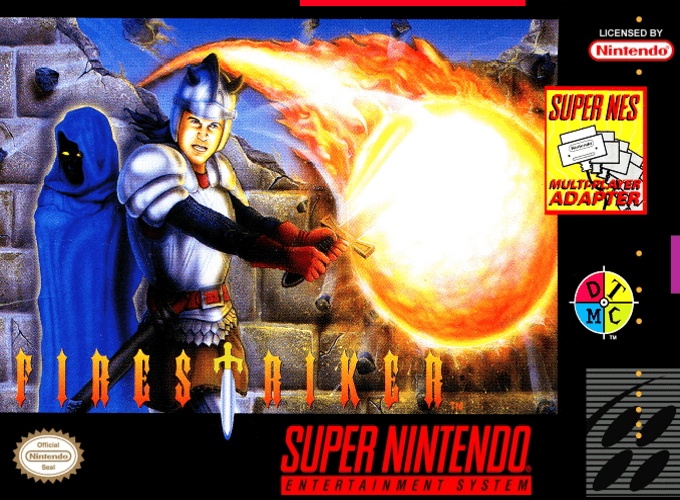 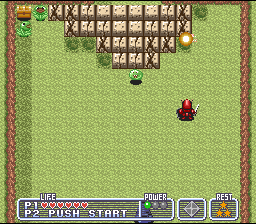 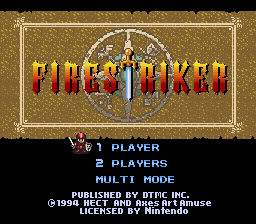 A long time ago the kingdoms of wind, fire, earth and water competed for the Trialight, a weapon created by the Arch Mage Wylde that can only be used by a Firestriker. The kingdom of wind won and united the four kingdoms. Wylde however, was not satisfied with peace and conjured four monsters to overthrow the united world. Now, only the kingdom of wind remains and the player takes control over the last Firestriker to free the other kingdoms and defeat the monsters. Even though Firestriker looks like a typical SNES RPG, it is in fact an action game that has more in common with a pinball-game than with any other genre. The Trialight is a ball of fire that basically behaves like a pinball. The player controls the Firestriker who can freely walk across the screen and strike at the Trialight to control its movement. Levels are filled with obstacles, destroyable block and monsters. Monsters and blocks can only be destroyed by the Trialight. The goal of each level is to maneuver the Trialight towards the exit of the screen. The exit is usually blocked by destroyable obstacles and sometimes certain conditions (such as killing all monsters or destroying certain objects) have to be fulfilled before a level can be completed. If the Firestriker is killed or the Trialight falls off the screen, the player loses a life. Additionally to the Firestriker, the player can use the shoulder buttons to control a magician who (in single player mode) stays at the bottom of the screen. The levels consist of several screens and are entered from a world map. As the game progresses, the player will also fight several bosses and free other Firestrikers whose special abilities are necessary to complete the game. Firestriker also features a two-player cooperative mode as well as a duel-mode for up to four players.