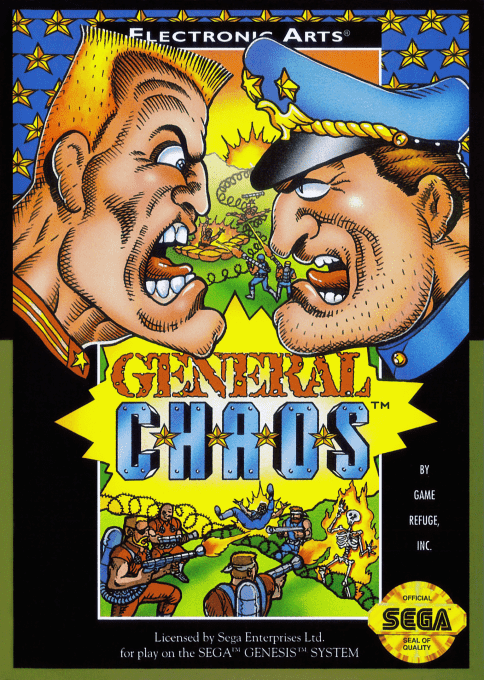 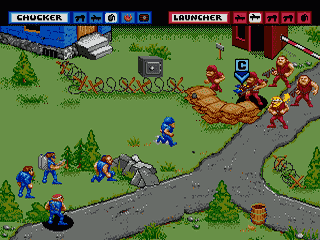 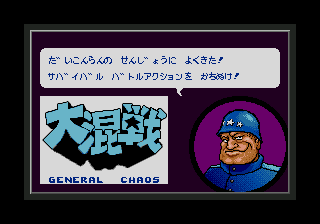 General Chaos is an arcade-style squad RTS where the player controls a team of five soldiers in a limited battleground, in a classic Red (General Havoc, headquarters in Viceria) vs Blue (General Chaos, in Moronica) all out war. The goal of the game is to push the frontline to the enemy headquarters, by winning individual battles and then beat them in their own capital. There are five kinds of soldiers, each with their weapon of choice and range of attack: the Gunner (machine gun, medium range and wide arc), Launcher (rocket launcher, long range), Chucker (grenades that can be thrown over barricades), Scorcher (flame-thrower, close combat) and Blaster (dynamite sticks, close range). Before each battle, players can choose the composition of their team from one out of four choices: Assault team, Brute Force, Commandos (a team of just two soldiers which have different controls) and Demolition. Gameplay is simple to learn, with the A button being used to fire at the nearest enemy, B to move to a the pointer location and C to cycle through soldiers. Using the commando team changes the controls, with the directional pad controlling a soldier directly, with B being used to call the other soldier nearby. While basic commands are simple, the player must deal with things such as distance from target and angle of attack to succeed. If two opposing soldiers face-off during battle, they engage in a brawl (indicated by a cloud of dust). When that happens, the battle stops and the players are in direct control of the soldiers: A punches, B kicks and C blocks. Every downed soldier can can be rescued if there are enough medics available, earned at the end of each battle depending on how well the player did. Up to four players can play, cooperatively or against each other.