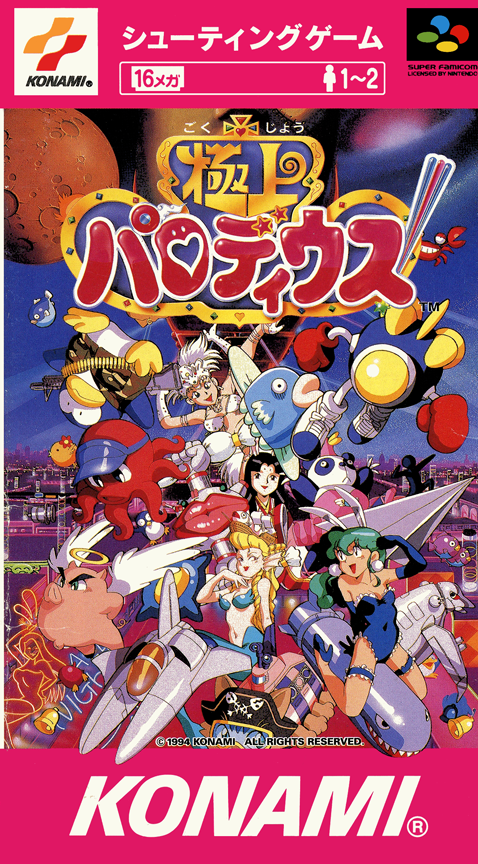 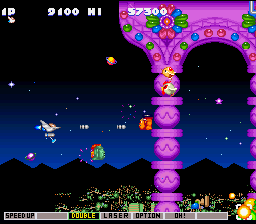 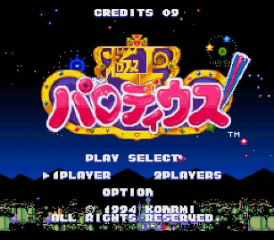 Konami's Gradius and space-shooter parody series continues with this second installment. Gameplay is similar to the Gradius series in that you control a ship that can move anywhere on the screen while the screen itself scrolls from left to right. Enemies appear in waves and destroying all the fighters in a single wave releases power-ups which may be used to choose your ships upgrade. The Upgrade bar too is lifted from Gradius, however each character has different names and functions for their upgrades. In Gokujyou Parodius, you are now able to now choose from 11 different characters... many of whom appear from other Konami games. They include: 1. Vic Viper: a ship from Gradius 2. Takosuke: the "octopus" of the previous Parodius game, and also seen in at least one Goemon 3. Twinbee: making his appearance from the Twinbee side scrolling games, Twinbee is a squat round robot with a jetpack and a disproportionately big punching glove 4. Pentaro: the original "joke character", Pentaro made an appearence in a previous Gradius title as a flying penguin. However he does star in his own games as well, Konami's Penguin Adventure 5. Hikaru: Hikaru is a girl in a tight fighting "bunny suit" who is riding on top of a missile 6. Mambo: Mambo is a strange looking fish with two horns on the top of his head and on his underside 7. Michael: some kind of fat angel pig. He has wings and a golden halo over his head 8. Koitsu: A blue stick man riding on a surfboard. He's probably one of the more 'normal' characters 9. Goemon: star of the Goemon series of games. Goemon is a ninja warrior equipped with wooden pipes. He flies around in a superman pose for his appearance in Parodius 10. Dracula: star of Konami's Kid Dracula, this white haired squat character retains his vampiric abilities including that of being able to change into a bat 11. Upa: a flying baby. Upa is actually from a Konami game by the name of Bokutte Upa but is probably just more recognizable as "the flying baby" of this crazy shooter In addition to your player-character, the levels themselves will be full of a strange mix of Konami references, bright colors and the just plain zany. it's not uncommon to have to fly your ship underneath a woman's legs for example or chased by a giant walrus or having enemies shooting cute pink hearts at you.