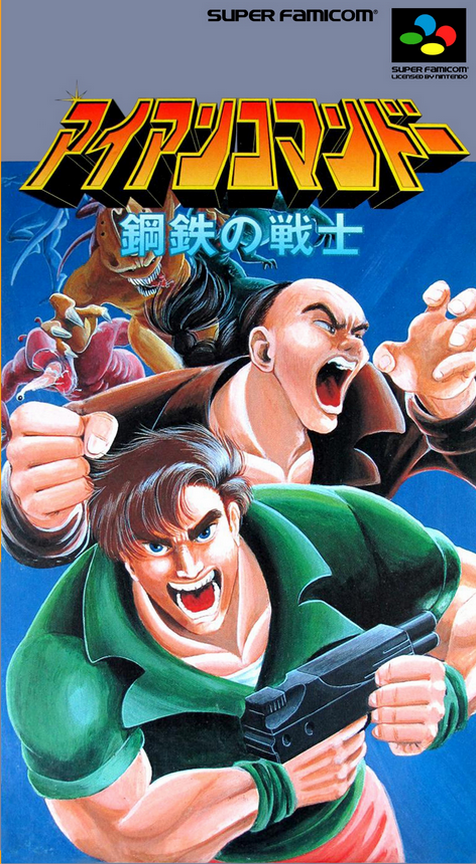 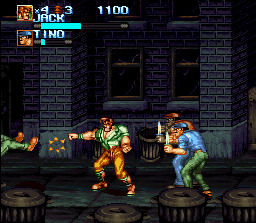 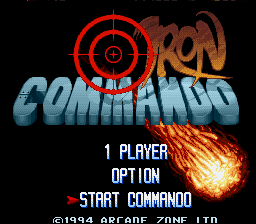 Iron commando is a brawler beat-em-up like Final Fight or Streets of Rage with lots of weapons and big end bosses. The B-movie story is cheesy and does nothing more than accommodate for the action. From the introduction sequence: "The peril came from outer space. A meteorite entered the earth's atmosphere bringing chaos. After observation, the scientists found that the meteorite was radioactive and had to be destroyed. Unfortunately, terrorists from g.h.o.s.t. want the meteorite too. The Iron Commando's mission is to retrieve the deadly body and avoid genetic mutation." The player or players walk along the levels beating up enemies. On some levels you ride a motorcycle or jeep, even a mine kart, and shoot your way through hordes of enemies. There are several end bosses, some are screen filling like a helicopter and a giant robot. Some enemies will drop food, grenades or weapons as you beat them into a bloody pulp. There are lots of different Weapons: 9mm guns, shotguns, machine guns, knives, baseball bats. The weird thing is, enemies that use a sword and even dogs will occasionally drop a machine gun or baseball bat.