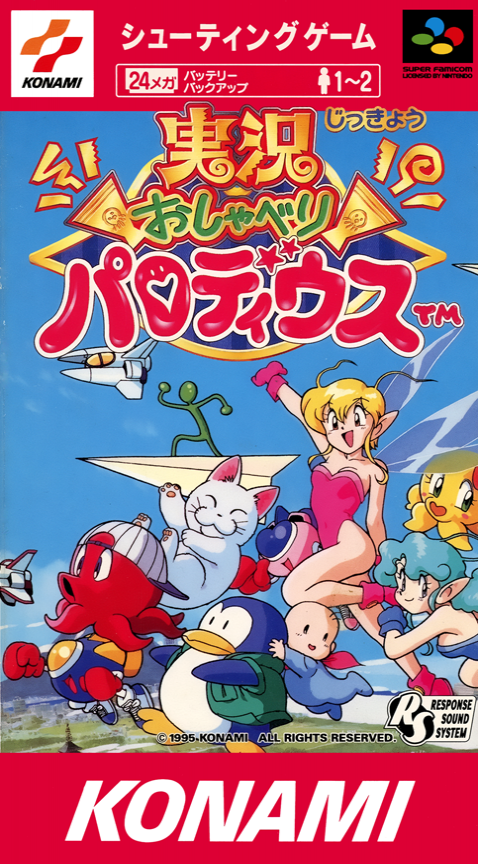 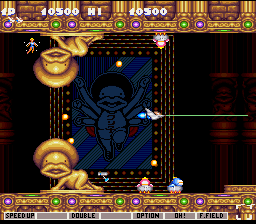 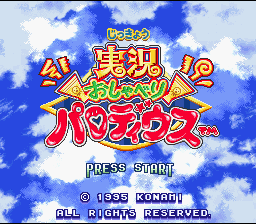 The third in the Paroidus series, it's the same gameplay and zaniness that substantiated the first two games. Gameplay itself is a copy (a parody rather) of Konami's famous Gradius series in that the screen scrolls from left to right (most times) and you maneuver around the screen destroying waves of enemies and avoiding obstacles. Unlike previous Parodius titles, this game contains a difficulty adjustment option, allowing the player to make things easier... or harder. Also unique to this parodius title is a bit of japanese digital voice that shouts out various things at you while you play. Survival throughout the level earns you a boss fight, which frequently includes some of the strangest characters in the game. Make no mistake, this *is* Gradius, but with all sorts of strange graphics, music and references to other Konami games... So in other words, it's Parodius! There are now more power-ups than ever including the standard power-up (red, used to upgrade weapons), the shield power-up (blue) and a variety of different coloured bells. Green Bells will make you huge on the screen, Yellow Bells are worth points (points in turn are worth extra lives), Blue Bells are "big bombs" that clear the screen of enemies/shots and can be saved until you need them, White Bells will give your character a megaphone that will shout out japanese phrases, the characters of the phrases themselves can be used to damage enemies (the power of words!), The Red Bell stockpiles you with three point-defense lasers... only one of which can be activated at a time and disappear after a short while. Finally the purple bell will clear the screen of all but the strongest enemies... and will turn them into power-ups. This time around there are 16 different characters to chose from and the power-ups and weapons that they use are more unique than ever. Several familiar "faces" return and they've brought along friends to share in the party: Vic Viper: The "gradius ship" appears once again in this gradius parody, equipped with it's traditional gradius weapons 2. Lord British: The "other" Gradius ship and arguably the more famous of the two. Lord British has weapons similar to Vic but quite different also.Missiles and shields work differently for instance. And Lord British uses a Ripple gun instead of a double shot. 3. Pentaro: It just wouldn't be a Parodius game if Pentaro wasn't involved. Originally from Konami's Penguin Adventure, Pentaro retains the same abilities from previous Parodius games... however his Potion weapon may now hit multiple enemies and his normal weapon shots explode against obstacles 4. Hanako: Also from Penguin Adventure, Hanako the penguin is Pentaro's girlfriend. While Pentaro is blue, she is the red penguin. She plays nearly identical to Pentaro with the exception of her S. Bomb weapon 5. Twinbee: Twinbee, from the Twinbee games is another returning Parodius star. Unfortunately he hasn't been upgraded since previous games, so his weapons are nearly identical; Punching Glove Rocket and all... 6. Winbee: Winbee, also from Twinbee is red and has moves identical to Twinbee, except for one difference... when she has 3 Options available, she can power them up to harm enemies that touch them. 7. Tako: Again, it just wouldn't be a parodius game without a flying octopus. And here he is, still wearing a baseball cap, but otherwise unchanged from previous Parodius games. 8. Belial: A yellow female octopus with a bow in her hair, she is identical to Tako with the exception of her Missile and Double weapons... which are instead identical to the Vic Viper. 9. Soitsu: A stickman (now green) surfing aboard a paper airplane, Soitsu plays similar to Koitsu from the previous game, aside from his colour. His laser weapon is able to charge up to deliver more power and he drops little stickmen onto the ground which occasionally dance around rather than attacking. Additionally he has an "upgrade power" (S. Power) that make all his other abilities stronger 10. Doitsu: Similar to Soitsu but with a Double Laser ability. He is an orange stickman riding on a paper airplane and no "upgrade" power, using normal options instead 11. Upa: Upa aka The Flying Baby is back from the previous Parodius game (as well as his original game, Bokutte Upa) and plays nearly the same. Instead of a shield, he has a Mega Crush power that damages all on-screen enemies... and also has an "Upgrade Power" in the form of Grade Up that makes his other abilities stronger. 12. Rupa: Another flying baby (presumably also from Bokutte Upa), Rupa plays similar tot Upa but with a Multi Spread gun which fires missiles in multiple directions (with each upgrade) and a S.Vulcan gun which automatically aims towards enemies. 13. Mike: A cute little kitten who happens to to have a very powerful wave weapon which can travel through obstacles and enemies. Additionally he has a multiple bomb ability which requires his "upgrade ability" (Grade Up) to get really powerful 14. Rani: Another cute kitten (this one rolled onto his bottom facing forward) with very power weaponry. Some of the highlights include a Reflect weapon wherein the shots bounce off of obstacles. Another is the S laser which travels forward but then homes in Up or Down to hit the enemy. And finally, Rani's missile weapon is two homing bells. Rani also has an "upgrade ability" in the form of Grade Up, however it only upgrades the Reflect Shot. 15. Memim: One of the fairy characters, Memim is a female flying girl with standard female bikini clothing. She carries some unique missile weapons however, whose direction is determined by Memim's current location on the screen when fired. 16. Sue: The other fairy with tight clothing, Sue is unique in that her weapons are upgraded/displayed in a different order from everybody else's in the game. For instance her Option is the 4th weapon on the list rather than the 6th... requiring less power-ups to activate it. However aside from that... all of her weapons are the exact same as the Vic Viper's.