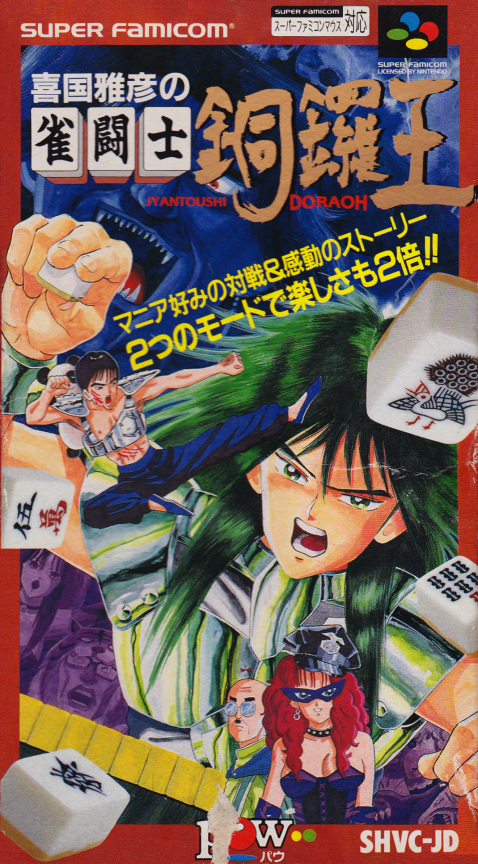 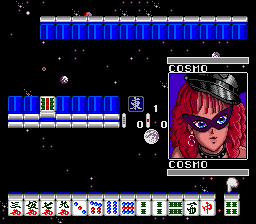 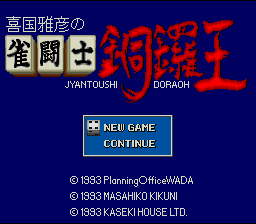 Overview Unleash your mahjong power!!! Jantoushi Doraou is a simple mahjong game for the Super Famicom. It features a wide variety of strange and ridiculous characters and is largely comical in nature. It follows typical Japanese mahjong rules, although there are a few exceptions (mentioned below). Many characters are also capable of performing special attacks when their "cosmo" meter is full; these attacks can have many different incarnations, from simply beating the opponent unconscious for a win (surprisingly ineffective) to instantly getting a ron. The game also features a password feature which allows players to save their progress. Story The player assumes the role of the titular Jantoushi Doraou, a master mahjong Saint who resides in Sanctuary and is committed to protecting the goddess Atenaide. Unfortunately, the villainous Mahjong warlock Jankou invades Sanctuary and seemingly kidnaps Atenaide! It's Doraou's duty to rescue her from the clutches of this fiend, and he sets off on a journey to gather the other Mahjong Saints and journey to Jankou's castle to rescue her. This journey winds through a number of towers with guardians based on the Chinese Zodiac; this is a direct parody of Saint Seiya, where the Gold Saints are based off of the Greco-Roman zodiac.