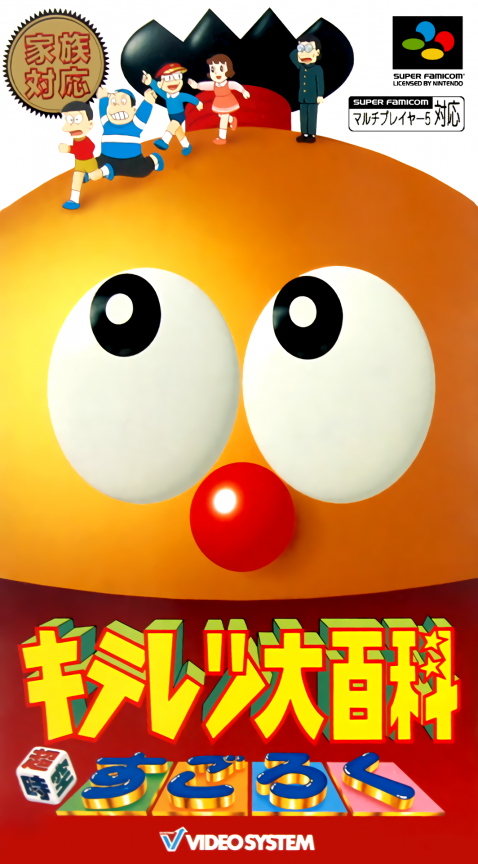 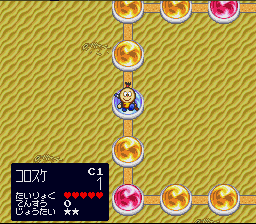 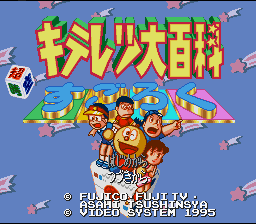 Kiteretsu Daihyakka: Choujikuu Sugoroku ("Kiteretsu's Great Encyclopedia: Super-Dimensional Board Game") is a virtual board game for Super Famicom. It uses the Kiteretsu Daihyakka license: a manga and eventual anime from the creators of Doraemon about a genius kid inventor who uses a book of designs to create wondrous devices such as a time machine and his samurai robot companion Korosuke. He is joined with his friends in his various adventures: Miyoko Nonohana, his girlfriend; Kaoru Kumada, a local bully; and Tongari, who is skittish and easily frightened.nnnnThe game is similar to other board game adaptations for 16-bit consoles. Players move around a board and receive bonuses or penalties depending on where they land. There are a number of boards to choose from, each with different themes.nnnnThe player rolls a die and moves a certain number of spaces around a board. Depending on where they land, they either earn points, lose points, gain a special item or take part in an event. Generally speaking, blue squares are beneficial, red squares are detrimental and golden squares provide bonus items.nnnnIf a player lands on the same square as another character, they get into a contest: the winner of these contests will be able to take an item from the loser. The contests are generally simple mini-games, such as a sprint race or a sumo battle.