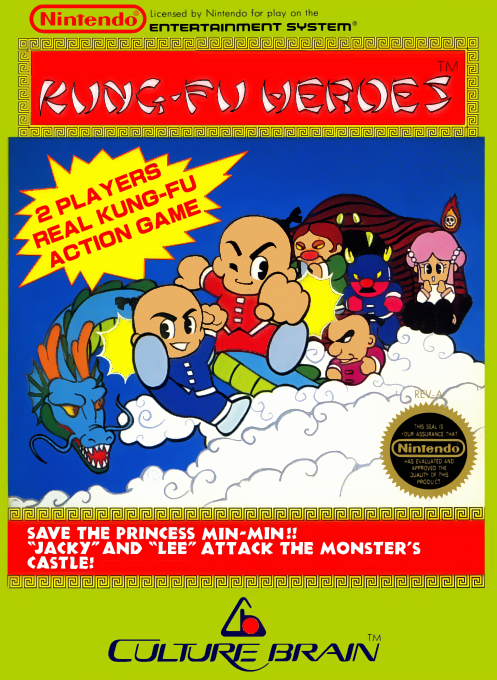 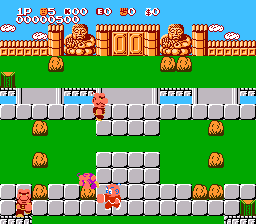 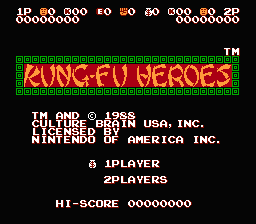 Kung-Fu masters Jacky and Lee (Lee and Loo in the arcade version) return to their kingdom from a long trip. They discover that in their absence, Princess Min-min has been kidnapped and the 10 treasures of the kingdom stolen. Jacky and Lee must fight their way into eight different castles in order to defeat the monsters and rescue the princess. Chinese Hero is a top-down action game for one or two players, both playing on the same screen. Each ninja has the ability to move in any of four directions: up, down, left and right, as well as punch directly in front of them and do a "Moon Sault Kick" (which can be powered up to a "Miracle Kick") whereby they jump and somersault directly in front. Both punches and the Moon Sault Kick can harm enemies. Defeating a certain number of enemies on each level will open the doorway into the next level. Occasionally extra passages (named "Quick Passage Zone") can be found to take shortcuts through areas with stronger enemies. At times, defeated enemies will leave power-ups behind which either player can collect in order to increase their abilities temporarily. While power-ups are diverse, here are examples of some of the effects: weakening specific enemies, invincibility, increased attack, extra lives and the ability to use projectile attacks.