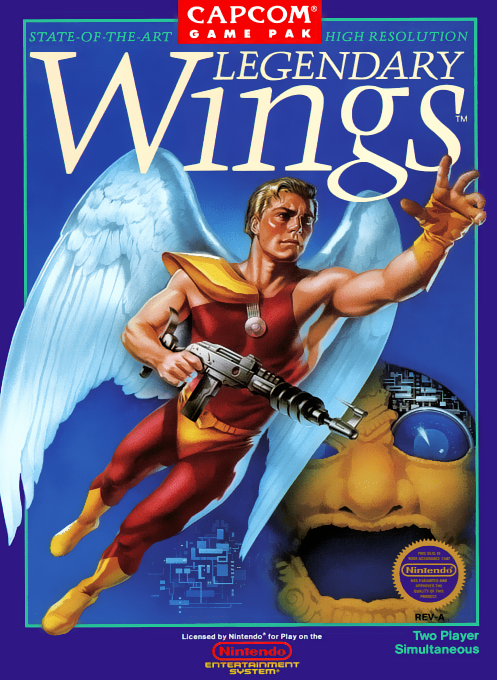 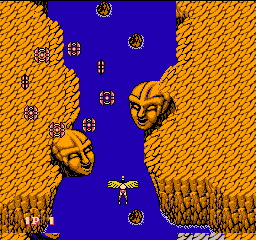 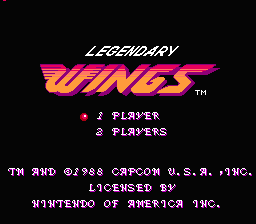 Legendary Wings is an arcade shooter influenced by Greek mythology. A heroic figure from ancient times thrust into a strange futuristic world, you must fight your way through six levels to defeat "The Devil" and save the day. The primary gameplay mode is a top-down, vertical-scrolling shooter similar to Xevious and Capcom's own 1943. Your main weapon is used to attack flying enemies, and your secondary missile weapon is used to attack fixed placement, land-based enemies. Numerous powerups are available along the way, and these both improve your weapons and your resistance to damage (every "upgrade" is worth a free hit from enemies without dying). Several secondary gameplay modes (Danger, Lucky, and Palace) are also triggered at key points in the vertical-scrolling mode. All of the secondary modes are side-scrolling shooters. The Danger stage requires you to face a gauntlet of enemies, while the Lucky stage is full of powerups, game continues, and other bonuses. The Palace stage is triggered when you defeat a mini-boss; you must get past the palace defenses before you can face the end-of-stage boss. And, oh yeah...don't get crushed by those walls!