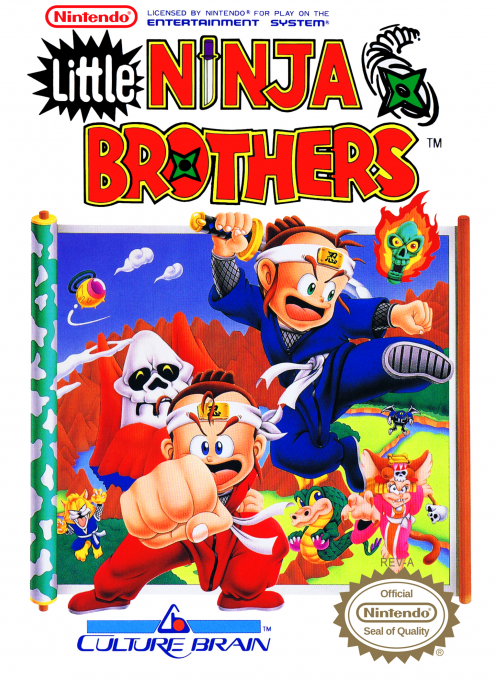 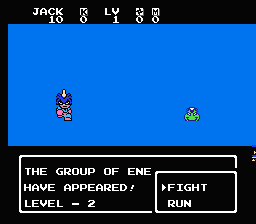 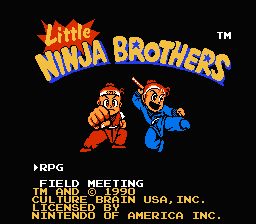 Blu Boltar, lord of the Yoma clan has invaded Chinaland and captured the Emperor. Sending out a TV broadcast across the realm, Blu Boltar declares himself the ruler. Jack and Ryu are the ninja masters of Chinaland, training under their mentor at Mt. Epin. Having heard the news of the Emperor's capture they set out to defeat Blu Boltar and his Yoma Clan. Little Ninja Brothers is the second game in the Super Chinese series and the first to be a role-playing game. Players, controlling either Jack or Ryu, explore the world map in an overhead view. Random encounters with monsters will give the option to flee or to fight. During combat, gameplay resembles the first Super Chinese game, where players move their character up, down, left and right... and can either punch or do a somersault jump to damage enemies. Additional power-ups, can also be found during the course of battles. Successfully defeating enemies awards experience points and Sen money. Jack and Ryu share experience points so they remain at the same level. A second player can join in at any time and share the experience level of the first player. Sen is the currency of the world and can be spent in the convenience store of each town to increase abilities and buy new weapons. Some of these include throwing stars, special martial arts techniques, swords, projectile attacks and other special powers. Towns also contain people who will give clues and information to Jack & Ryu. When bosses are encountered, the gameplay changes to a turn-based system. Each turn, commands are given to Jack & Ryu, which include usage of special items and skills acquired during the game, who then perform actions based on those commands. The enemy's turn takes place the same way. The battle ends when one side of the conflict runs out of hitpoints. Little Ninja Brothers also features a field meeting mode where Jack and Ryu compete in a variety of sports themed events themed around a foot race. The different modes available for this competition include: a regular Dash, Popping Baloons, Athletic Obstacle Course, Finding a treasure hidden inside rocks, Eating food attached to balloons and finally, Shooting targets with projectiles.