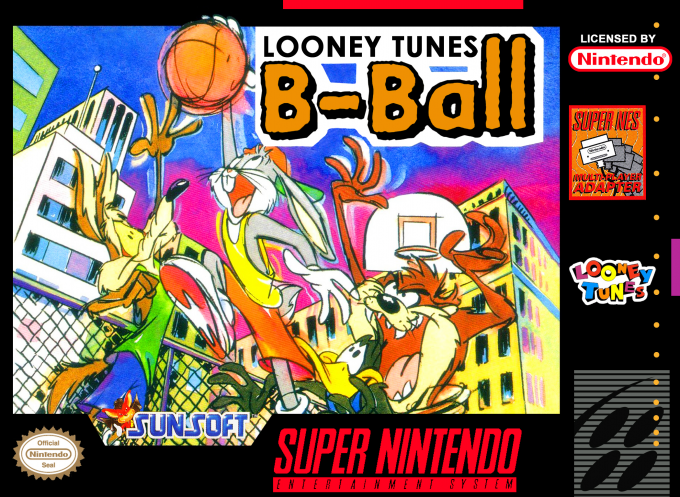 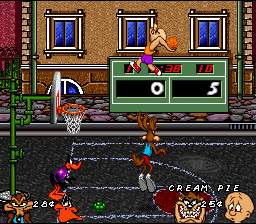 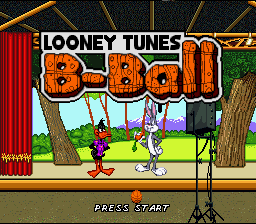 The Looney Tunes work hard at Warner Bros. studios acting in cartoons for all to enjoy. It's tough work, and afterwards they just want to relax and maybe shoot a few hoops in the parking lot. Of course they can't entirely leave their wild antics inside the studio, and will certainly bring some kind of zany onto the basketball court. Looney Tunes B-Ball is a 2-on-2 Basketball game, similar to the more well known NBA Jam. However, Looney Tunes is much more informal and silly, though this level of silliness is set by the player via the Wackiness Meter on the main menu. Players choose their teams from the likes of: Bugs Bunny, Daffy Duck, Elmer Fudd, Wile E. Coyote, Tasmanian Devil, Sylvester, Yosemite Sam and Marvin Martian. Each player has unique statistics for their shooting, 3-pointers, defense, stamina and speed. Once on the court, the player can pass the ball, shoot the ball, grab a burst of speed or unleash a special defensive ability or a special offensive ability.. These abilities include cream pies, time bombs, sticks of dynamite and other fun toys from the ACME Corporation. Offensive Abilities must be "bought" by collecting gems and other items which occasionally show up on the basketball court.