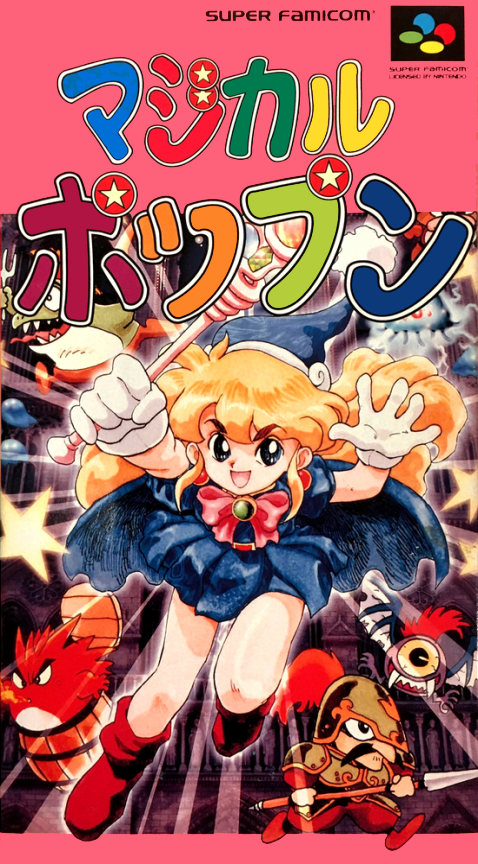 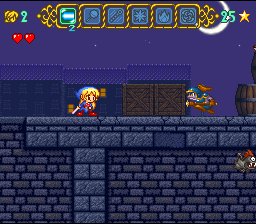 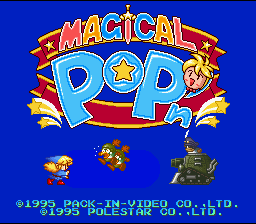 The kingdom of Toaru prosperous and peaceful place that's famous for its magic. Within Toaru castle lies the Magic Gem which legend says can give the person who holds it great magical powers. Because of this, it is sealed inside the castle to prevent the gem from landing in the wrong hands. One night, a dark figure and his army of monsters invades the castle and steals the gem. Armed with a sword and her magic powers, the Princess Toaru sets off to retrieve the gem and save the world. Magical Pop'n let's you play a young, energetic little princess who is simply called...Princess. The game starts off with Princess chasing after a floating bad guy off a balcony and into town. Princess has two type of weapons: her sword and her magic powers. When using magic, Princess will consume star powers. Different types of magic requires a different number of stars. Stars can be collected throughout the game and you can also get stars after defeating a foe. In the first stage you will only have access to Princess' magic beam powers which shoots small beams of laser at enemies. Later, you will receive the ice, fire and other powers. The sword can only be used to perform close range slashing against enemies. But it does not cost any stars. In each stage, Princess will be confronted with a number of enemies that she must fight off to advance. There are many mini-bosses and at the end of a stage, you will have to fight the main boss. Princess' health is indicated by the number of hearts she has in her health meter. There are various items that will help refill the meter: Candy refills half a heart, A slice of cake refills a whole heart and a birthday cake will refill the entire meter. You will be taken to the game over screen if you lose all your lives. But, no worries, there's an unlimited number of continues. There is no save feature in the game.