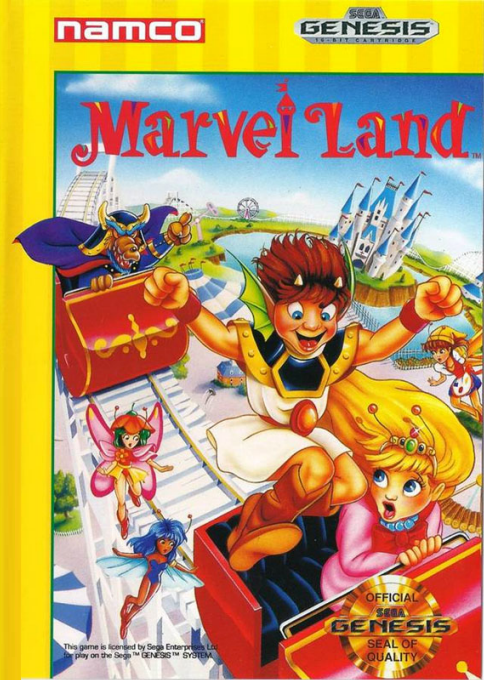 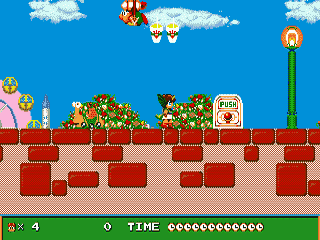 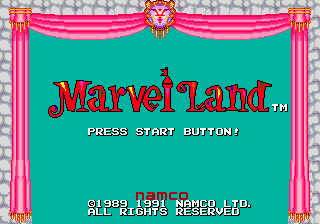 In the land of Coni, its inhabitants lived in harmony. At its center lies a mountain called "Peace", in which an amusement park known as "Marvel Land" resides. This park is well-protected by the Fairies. Later, King Mole became rule of the under dwellers and sent his minions to take over Marvel Land, imprisoning the Fairies inside crystal balls. A young lad named Talmit is called upon to rescue Wondra the princess, and free the Fairies from King Mole. Marvel Land consists of five worlds with seven stages each, and the game plays in platform style, in which you need to run through the level, killing enemies, and find the exit door. More often than not, you have to go through a bullseye to reach it. If you hit the bullseye at its center, you are awarded more points than you do by hitting it above or below. You kill enemies by either jumping on their heads or attacking them with clones, which trail your movement unless you use them to attack enemies or collect food. The clones have a limited life and disappear one by one as you use them. During the game, you can open any treasure chests that you may find along the way, and release power-ups which include boots that make you increase your speed, dragon wings that enable you to jump higher and giving you the ability to glide to a soft landing, and giving you the use of the "clone" attack. Hidden throughout the sections are warp doors that can either take your backwards or forwards, anywhere within the park. Each section of a world has you riding a roller coaster, in which you must stay on the cars while avoiding signs and enemies. The last section of each world has Talmit going through the castle to reach the end-of-world boss. Unlike other platform games where you must defeat bosses with weapons, you are challenged to various mini-games starting from "rock, paper, scissors" through to the Musical Chairs variant. If you win one of the mini-games, you are able to free one of the Fairies, and obtain a crystal ball that you need to defeat King Mole. You then proceed to the Bonus Stage where you must collect shooting stars for points. If you lose a mini-game, you are transported back to the start of the last section.