Mermaids of Atlantis : The Riddle of the Magic Bubble 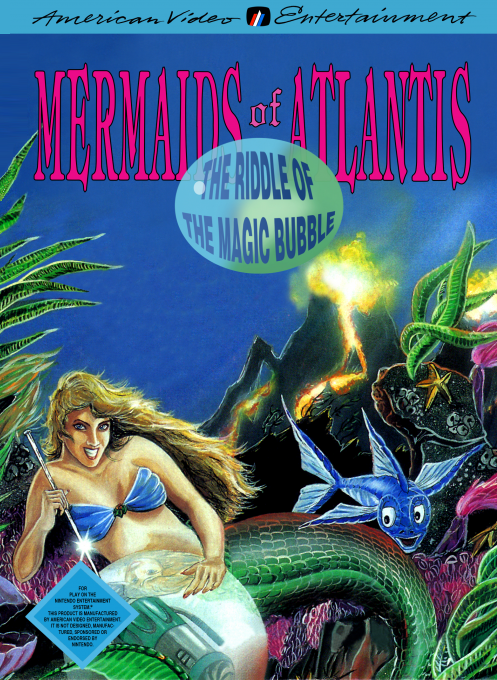 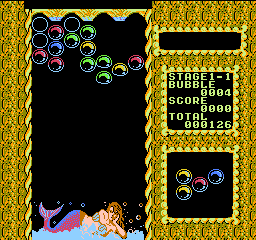 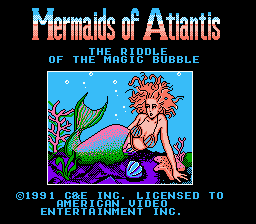 Corrected version of Bubble Bath Babes which was an adult-oriented puzzle video game developed by C&E. Although the game was not licensed by Nintendo, it is designed for play on the Nintendo Entertainment System. It is one of three pornographic themed games released by Panesian, along with Hot Slots and Peek A Boo Poker The gameplay is reminiscent of that of Tetris and Puzzle Bobble in that the goal is to steer clusters of rising bubbles and place them so that they connect to other bubbles of similar color along the top of the screen. If the sufficient number of similar bubbles are touching, they will be cleared and all free neighboring bubbles will rise further, allowing for combos. If the accumulated bubbles on screen reach the bottom of the playing area, the game is over. If a level is completed, the player will be rewarded with erotica. The original version was released by C&E themselves under the title Magic Bubble in 1991. It was licensed to American Video Entertainment, who released it in the same year under the title Mermaids of Atlantis, with all pornographic elements removed or obscured. A localized version leaving all pornographic content intact was released by Hacker International in Japan as Soap Panic and by Panesian in the United States as Bubble Bath Babes. The game is very difficult to find and is sought after by collectors, often topping prices of $1000 U.S. Dollars on auction sites such as eBay.