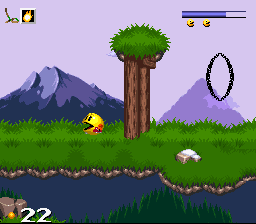 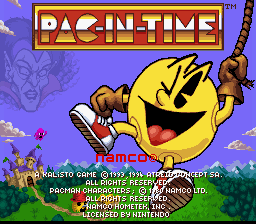 Everybody knows what/who Pac-Man is from his heyday in the '80s, but this time, we're getting a whole new adventure of our little eater. Guess his stomach is full, 'cause there's nothing much to eat here, only collecting points. This is much like some Indiana Jones adventure, only your little hero's Pac-Man instead of Harrison Ford. Pac-in-time is the US release of Fury of the Furries. It's exactly the same game. Only the characters were changed: the not-so-known European Tinies (from the Skweek/Super Skweek/Tiny Skweeks/Brainies/Tinies games) were replaced by the widely known Pac-Man.