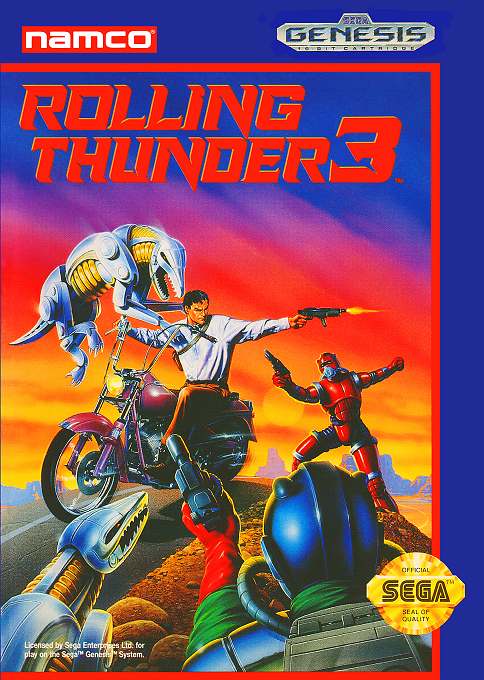 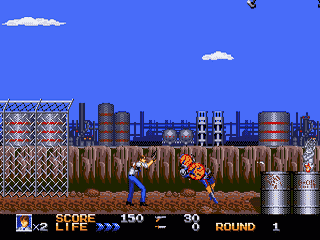 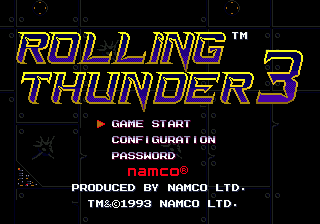 The events in the third game in the series are synchronous with RT2. At the end of the twentieth century, satellites around the globe are being shot down, disrupting communications. Secret agency Rolling Thunder discovers the organization behind the terror: Geldra. While agents Leila and Albatross are fighting the leader Gimdo (RT2), agent Jay is instructed to bring down Dread, the second-in-command. There are many improvements to the gameplay: Jay can shoot while jumping and shoot diagonally upwards with certain weapons. At the beginning of each mission, you can pick a special weapon such as a laser rifle, bazooka, flamethrower or grenades. You have to choose carefully as they cannot be reused in later missions. You can still hide in doorways and recharge your weapons behind special doors. The mission timer from the previous game has been replaced by a sniper that targets you with a crosshair when you don't move fast enough. The brutal difficulty from the previous games has been toned down: there are more life marks at the start and you now resurrect where you died, rather than returning to the last checkpoint. Unlike the previous game, you can only choose one character to play with. After completing a mission, a password is provided to continue playing. There are ten levels in total, with a few hidden areas.