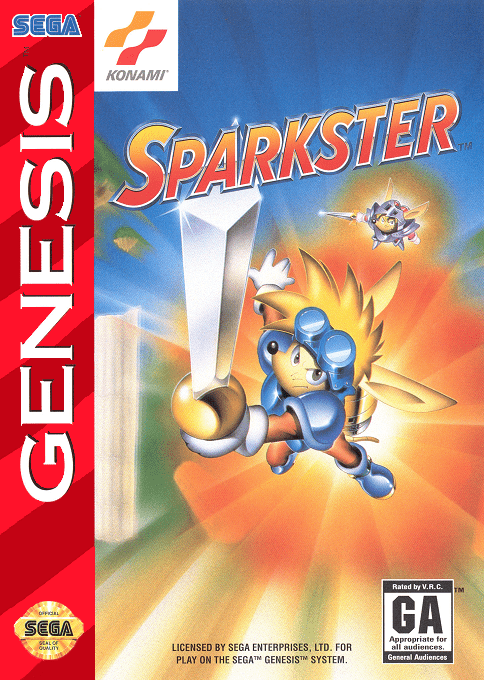 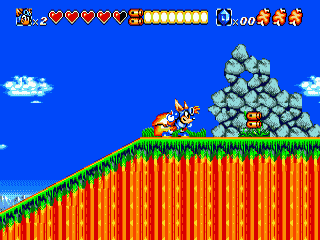 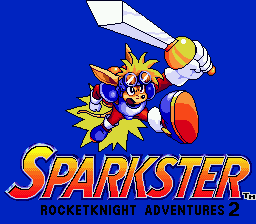 Sparkster is the sequel to Rocket Knight Adventures and is completely different from the contemporary SNES title Sparkster. It takes place immediately after the events of the first game. The interactive introduction scene shows Sparkster picking up a new sword after the final fight when his nemesis Axel Gear appears, the rocket knight gone evil. After a fight in giant robots, Sparkster manages to save Princess Cherry and returns her to the queen. Then suddenly Axel appears again and he kidnaps her. It turns out Axel is working once more for the Empire of Gedol. Sparkster has to return the peace in Kingdom of Zebulos, save the princess and bring an end to the evil empire. The game consists of six levels with 2D side-scrolling platformer gameplay. The opossum Sparkster can move around, jump and attack with his sword. Using his rocket pack, he can also perform stronger attacks and burst through the air in different directions. The rocket power consists of a double meter that refills gradually, making it possible to perform successive attacks in the air, ricocheting off walls. The first meter allows for the strongest attacks, but fills more slowly. Sparkster collects diamonds, apples to restore health and different types of power-ups for his sword. Most levels have typical platform gameplay, but there is also a level where Sparkster walks around in a giant robot, knocking enemies out of the air. For an additional challenge players can locate the seven swords hidden throughout the levels. When all of them have been found, the hero turns into Golden Sparkster. The game includes a password system.