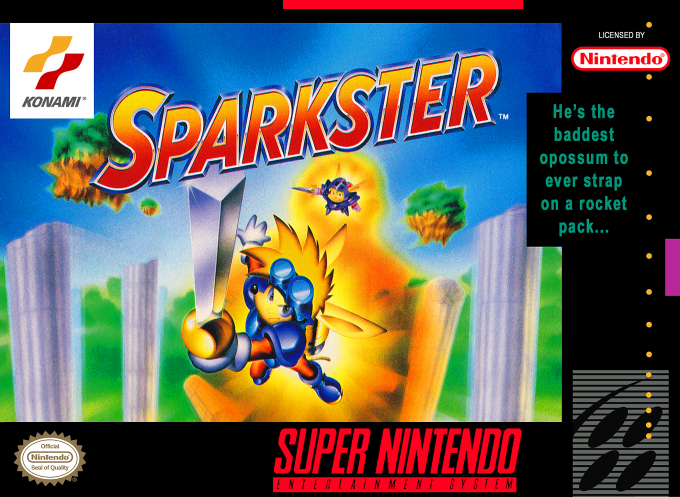 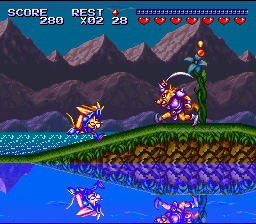 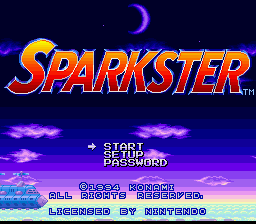 Sparkster is a 2D side-scrolling platformer starring the eponymous hero who previously appeared in Rocket Knight Adventures. It is very different from the contemporary Genesis title Sparkster, as it does not continue the story from the first game and has completely different levels, enemies and gameplay mechanics. In that way it can be considered a spin-off in the series. The introduction merely shows how an elderly man captures a girl and takes her into his airship. At that point Sparkster appears and he decides to chase them. Sparkster is a rodent carrying a rocket pack on his back. He can move around, duck, jump and hang from branches or rails. His regular attack is a sword slash that sends out a circular projectile. Through the L and R buttons he can dash left and right in a circle of fire. Keeping the attack button pressed powers up a rocket meter. When full, different types or actions can be performed: dashing left, right or up to cover a large distance, ricocheting off walls in a diagonal motion, or a stationary attack. The game consists of nine levels of which the last two can only be accessed on higher difficulty levels. Sparkster collects diamonds for points, defeats all types of robot enemies and collects apples to restore his heart meter near the top of the screen. Most of the game consists of regular platforming gameplay, with a few diversions where Sparkster rides a robot bird, or is shown from a top-down view flying in the air like a vertically-scrolling shooter. All levels have a level boss along with a large number of mid-level bosses. The game supports a password system.