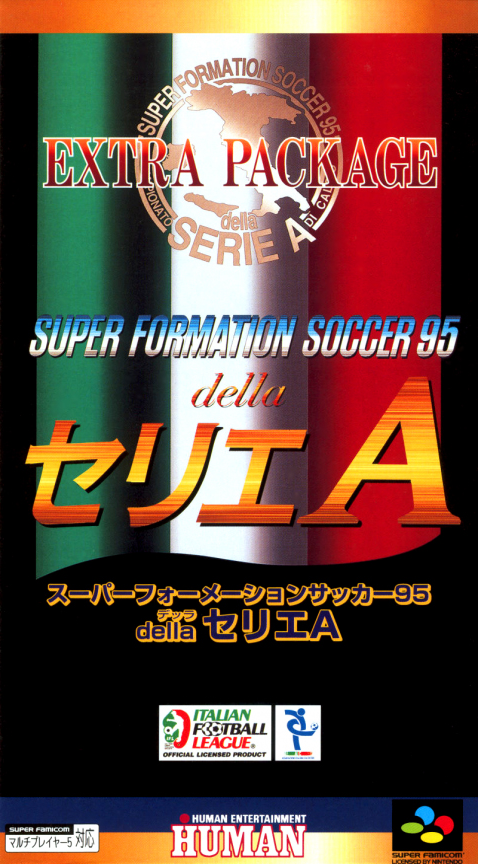 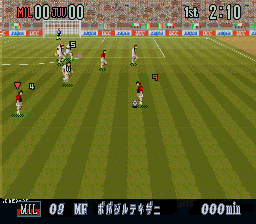 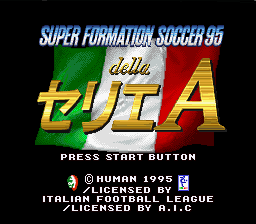 Super Formation Soccer 95: della Serie A is a soccer game from Human Entertainment and the fourth Super Nintendo game in their Formation Soccer series. It focuses entirely on Serie A, the highest division in the Italian Football League, and is licensed by the Italian Football League and Associazione Italiana Calciatori to use the real team and player names for the eighteen sides of the 1994-95 season of Serie A. It was released on the same day as another Serie A soccer game developed by a Japanese studio: Shijou Saikyou League Serie A: Ace Striker from TNN.nnnnThe game was released alongside two alternate versions:nnnn- The Extra Package version which included a special booklet with stats and data on all 396 players in the Serie A league.nn- A promotional version sponsored by UCC Xaqua, a soft drink endorsed by the Italian Football League and the footballer Roberto Baggio that consumers could win by entering a postcard competition. This particular edition had a very limited distribution.nnnnThe game uses sprite-scaling for its presentation, displaying the pitch from an angled vertical perspective in which the far side of the pitch is always visible, though becomes smaller or larger the closer the player is to the opposing goal. It also includes the player name across the bottom of the screen for whoever has possession of the ball at the time, making it easier to track what certain players are doing.