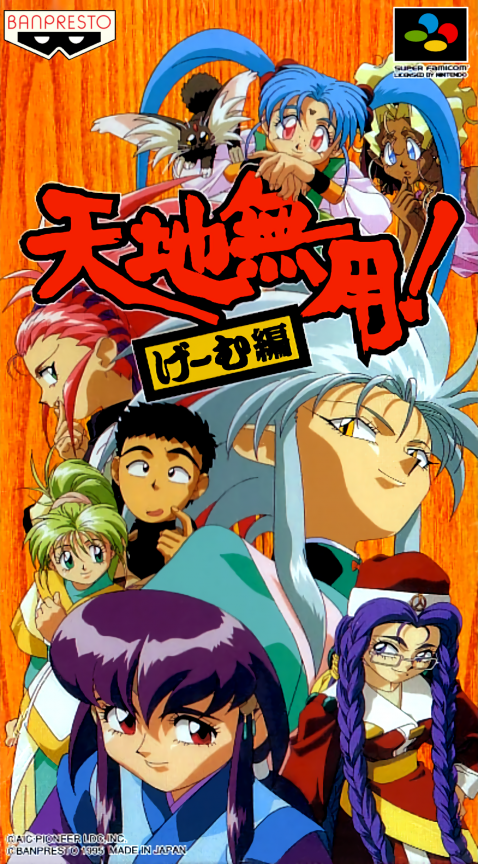 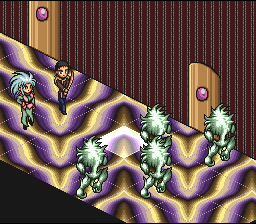 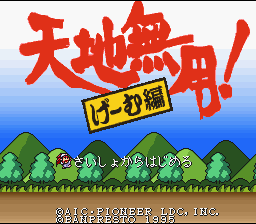 Sasami is kidnapped by a mysterious little girl with magical powers, and Tenchi and his companions must travel to rescue her, battling monsters and other creatures on the way. Tenchi Muyou! Game-Hen is a strategy game with RPG elements, based on the popular Japanese Tenchi Muyo! cartoon series. The game moves from battle to battle, with the plot being revealed through cutscenes between them. The player fights the computer on turns, controlling the individuals from a party of four. The party members are selected on a separate screen before each battle, and as the game progresses new characters become available. During the skirmish, selecting the characters brings up a menu with three command options: move, attack or end turn. A fourth transform option becomes available later, after they reach a higher level. When moving or attacking, glowing tiles on the ground show the maximum range of the action. Performing either one costs action points, shown as eight regenerating green dots on the status window, alongside basic statistics like health, defense and attack levels. Characters level up automatically while on the battlefield, increasing their abilities and receiving more powerful attacks. Health powers are also accessed through the attack menu, recovering lost points to an ailing comrade within their range. Characters can transform to a more powerful version when they have the ability to do so, and all the eight green dots are still available. The transformed unit has more powerful attacks and a wider range of movement. After the battle, a map screen appears where the player can save the game, and choose the next battle from one of the available paths. It is possible to revisit battlegrounds, to level up before tackling stronger enemies.