The Legend of the Mystical Ninja 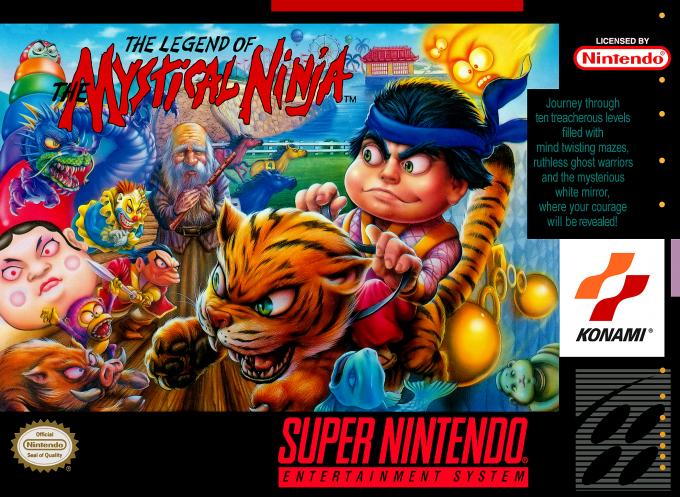 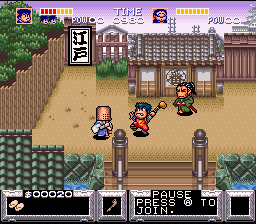 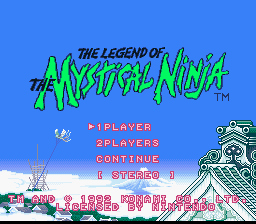 Goemon (Kid Ying) and Ebisu-Maru (Dr. Yang) are enjoying themselves at home, when they hear about strange spirits sighted at the temple and taking control of the other villagers. Concerned, that a new evil has appeared, the two set out to confront it at the temple. This is just the beginning of a new adventure that will take them Goemon and his partner all across Japan; into moutain villages, amusement parks, castle fortresses and more! Players control either Goemon or his partner Ebisu-Maru (or both, in 2 player mode). They sequentially travel through adventure-type villages and side-scrolling jump and run action stages. In the overhead-view villages, enemies must be defeated in order to earn money and other items (which include a weapon-enhancing lucky cat and mystical scrolls). The player is able to attack with their primary weapon and jump. Throwing weapons can also be used, which consume money for each one thrown. Attacking innocent villagers will cause the player to lose money. Money can also be gained (or lost) by visiting one of the numerous mini games, often in houses: which include mazes, whack-a-mole, the lottery, dice, a 3D labyrinth and a game trivia quiz show. Other businesses such as shops, resturants, inns and judo training can also be visited. At the end of each village is an "action area" which changes the game in a complete side-scroller. One or both players can enter this place, filled with obstacles, traps, enemies and a boss creature. In addition to the regular moves used in town, players also gain the ability to unleash one of four special attacks for each character (if bought beforehand at the judo training center). These consume the scrolls collected in order to use. Additionally, in a 2 player game, characters can ride piggy-back on one another, to avoid getting stuck by a scrolling screen.