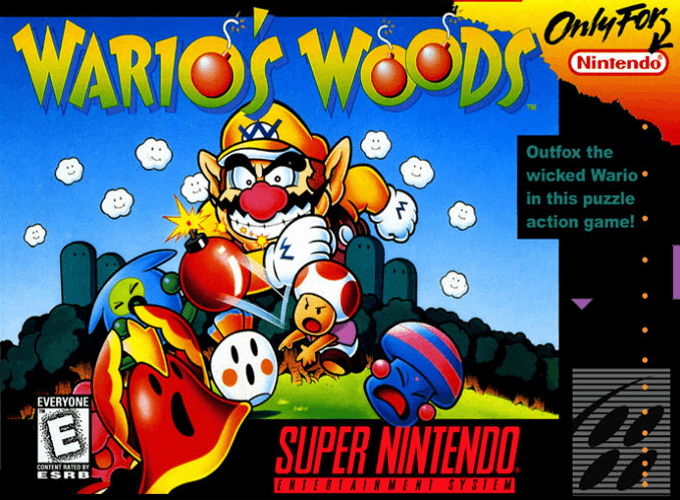 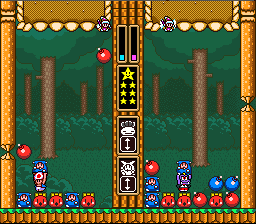 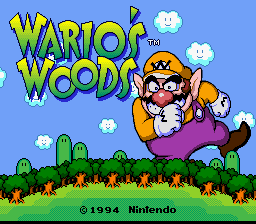 Wario's Woods is a puzzle game similar to Tetris or Columns, but with a twist. Instead of directly controlling the monsters and bombs that are falling down, the player controls Toad who has to carry around stacks of monsters and bombs and to combine them in the right way. One bomb plus at least two monsters of the same color have to be combined to make them disappear. If five or more objects are cleared at the same time, a diamond will appear. Destroying the diamond will clear all monsters of the diamond's color. There are four different ways to pick up objects. The A button lets Toad pick up the whole stack that is in front of him, the B button lets him only pick up one object, even if it's in the middle of a stack, the Y button lets him kick a monster or bomb that's in front of him and the X button places him on top of the stack that he is carrying. He can also run up walls and stacks to catch falling objects out of the air or to pick up certain parts of a stack. There are 5 different modes of play: a "Round Game" in which Toad has to clear numerous levels, a match versus a computer controlled opponent, a two player mode, a "Time Race" mode, and finally, an extensive training mode. There are some differences between the SNES and NES versions. Due to a lack of buttons, controls are a little different in the NES version (although all the moves from the SNES version are present). Also, there is no vs. mode against the computer, but the "Round Game" mode features two modes of play: one that includes boss-fights on every level ending with a 9.