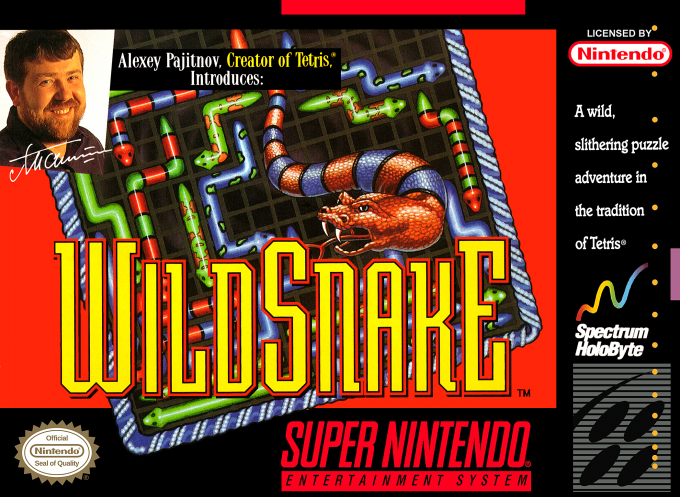 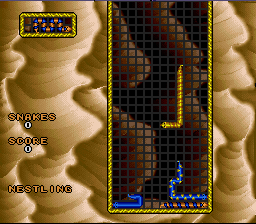 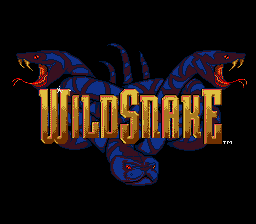 WildSnake is a puzzle game in which the player must manage falling snakes in a confined space and keep the snakes from reaching the top of the space. Snakes fall and slither until they reach a resting spot on the floor of the space. A snake will destroy any other snakes of the same color and pattern that it touches with its head on the way down, which often has the chain effect of loosening the pile of snakes so that all the snakes slither into new positions, possibly eliminating even more snakes. The game is played against a selection of backgrounds including desert, forest, water, or grass. Further, there are 7 game grids including the standard grid (a tall rectangle), X, plus, flask, Diabolo (an hourglass pattern), T-square, and obstacle (with a number of intermediate blocks). The player starts out as a nestling and earns higher and higher distinctions taken from the snake realm (garter snake, water snake, boa, mambo, python, king cobra, etc.) as more snakes are cleared. Also, as the level increases. more types of snake patterns must be handled. Sometimes, there is a flashing red snake that eliminates the first snake it touches. Further, there is occasionally an unstoppable snake that barrels down to the bottom of the space, eliminating all snakes in its path. The game can be played with 1 or 2 players in either easy, normal or hard mode. In the single player mode, the player can choose whether the preview showing the next snake will be shown. In 2-player mode, there is always a preview window. In fact, there is a queue of 3 snakes between the 2 player spaces from which the next snake is drawn. As a bonus during competition, multiple snake eliminations by one player result in obstacles appearing in the space of the opposing player.