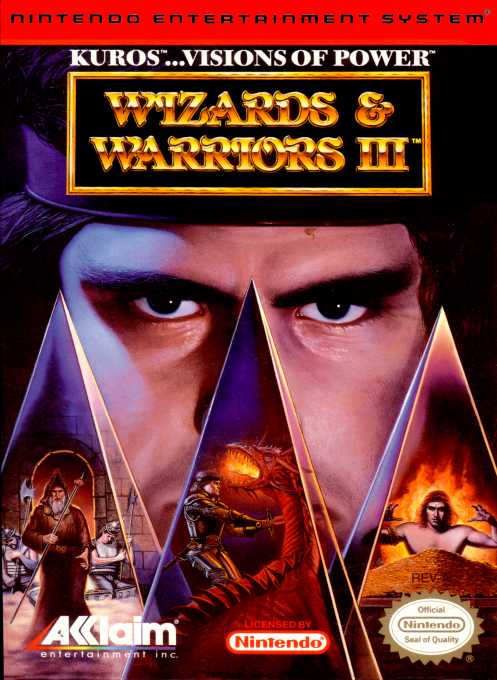 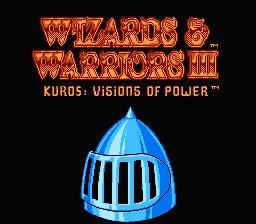 The third installment of Wizards & Warriors for the NES divulges during the intro that the evil wizard Malkil was not actually vanquished at the end of the second game. In fact, after the mighty battle with the hero Kuros, Malkil retreated to a nearby self-contained castle kingdom and conducted a hostile takeover. Kuros comes on the scene and must attempt to relieve Malkil of his ill-gotten command of the kingdom, its subjects, and especially its princesses. The third game in the Wizards & Warriors NES franchise features a similar feel to the first two games in that Kuros' movements are very quick and nimble. The player also has the ability to control Kuros' sword swing movements. However, Kuros has three different character classes to alternate between-- the knight, the thief, and the wizard. Each represents trade-offs between speed, attack strength, and defense strength. There are various guilds throughout the game devoted to training knights, thieves, and wizards where the player must complete challenging obstacle courses in order to increase their character class level. The gameplay proceeds up a large vertical city/castle with dangerous, monster-filled hallways and caverns. Kuros must kill monsters, gather money, buy goods and services, raise his character class levels, rescue a variety of apprehended princesses and gather special jewels, all in a quest to face off with Malkil once again. 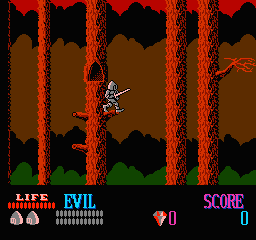